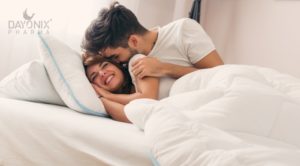 Research reveals that 10 to 20 percent of romantic relationships in the United States are described as sexless, which means having sex less than once a month or fewer than 10 times per year. However, According to the American Sexual Health Association, there have been lots of physical and psychological health benefits of sex.

Sex is an important factor in your life which is considered as an aerobic form of exercise that unleashes a dose of the body’s hormone serotonin – believed to help regulate mood and social behavior, appetite and digestion, sleep, memory, and sexual desire and function.  It also burns around 85 calories, or 3.6 calories per minute. Therefore, if your sex life is stalled by constant fatigue and reluctance, it’s time to find a solution. We provide best supplements to boost your erection and sexual function.

Beyond reproduction and pleasure, regular sex is considered to have a positive impact on different life aspects, including work, physical and cognitive performance and marriage future. Sex may also have a positive effect on certain organs and conditions, as well as reducing risk of some diseases.

Here are some of the health benefits to get your loved one between the sheets!

A research conducted by Dr. David Weeks, a British consultant clinical psychologist and former head of old age psychology at the Royal Edinburgh Hospital, reveals that regular sex can make both men and women look five to seven years younger than their chronological age!

“Casual sex would bring a lot of the detrimental things to staying youthful such as anxiety and the absence of security. Both those things are associated with a loss of youth,” he told.

Sex is a great stress reliever. Touching, hugging, sexual intimacy, and emotional attachment stimulate the release of endorphins and other hormones that elevate mood. Besides, at the point of orgasm, a huge dose of oxytocin is released which wipes out cortisol, the major stress hormone.

Studies have found that having sex once or twice per week boosts the amount of an antibody called immunoglobulin A (IgA) in your body. IgA plays a role in preventing illnesses and is the first line of defense against different kinds of infections including human papillomavirus, or HPV.

Numerous studies have shown that an active sex life is closely correlated with a longer life. Specifically, it seems beneficial for your heart. A study published in January 2015 in the American Journal of Cardiology revealed that men who had sex at least twice a week were less likely to develop heart disease compared to men who only had sex once per month.

Furthermore, experiencing a satisfying sex life among women reduces risk of hypertension and other cardiovascular problems. It might be because a woman’s sexual satisfaction with her partner improves her emotional well-being.

Neurologists have found that sexual activity can ease head pain associated with migraines and cluster headaches. Endorphins release during sex is the mechanism behind the pain relief. Endorphins are the body’s natural painkillers and are released through the central nervous system, which can block pain signals.

What’s the secret to living longer? It may be having more sex. In a decade-long study of over 1,000 middle-aged men, those who had the most orgasms had half the death rate of those who did not ejaculate frequently. Of course many factors contribute to longevity, but having an active sex life may be an easy, pleasurable way to extend your lifespan.

Orgasm simulates the release of a hormone called prolactin, a natural sleep aide. Prolactin promotes feelings of relaxation and sleepiness. Consequently you may notice an easier time falling asleep after having sex.

Remember to include foreplay in your sexual routine

Foreplay is about building an emotional connection which can help a couple feel closer, more intimate and ultimately more aroused. Communicate with your partner about his/her sexual likes and dislikes and about how he or she desires to be touched, stroked, kissed and caressed during foreplay— but have those conversations outside of the bedroom when you’re not about to have sex!